Since this is my third time in Paris, and I am here for two weeks, I figured I'd finally begin to explore the surrounding area a little bit more. Yesterday, I hopped on a bus and went to the lovely town of Rouen - only about an hour and a half away (and a €5 bus ticket!).

The bus drops you off pretty close to all the attractions, only about a 10 minute walk, so it's extremely convenient. The walk to and from the bus is also not at all a bad one. You have to walk over a bridge, and this is the view you get.

I must admit, I went here solely to see Le Gros-Horloge after seeing countless pictures of it on Instagram, like the one below (found on the web). 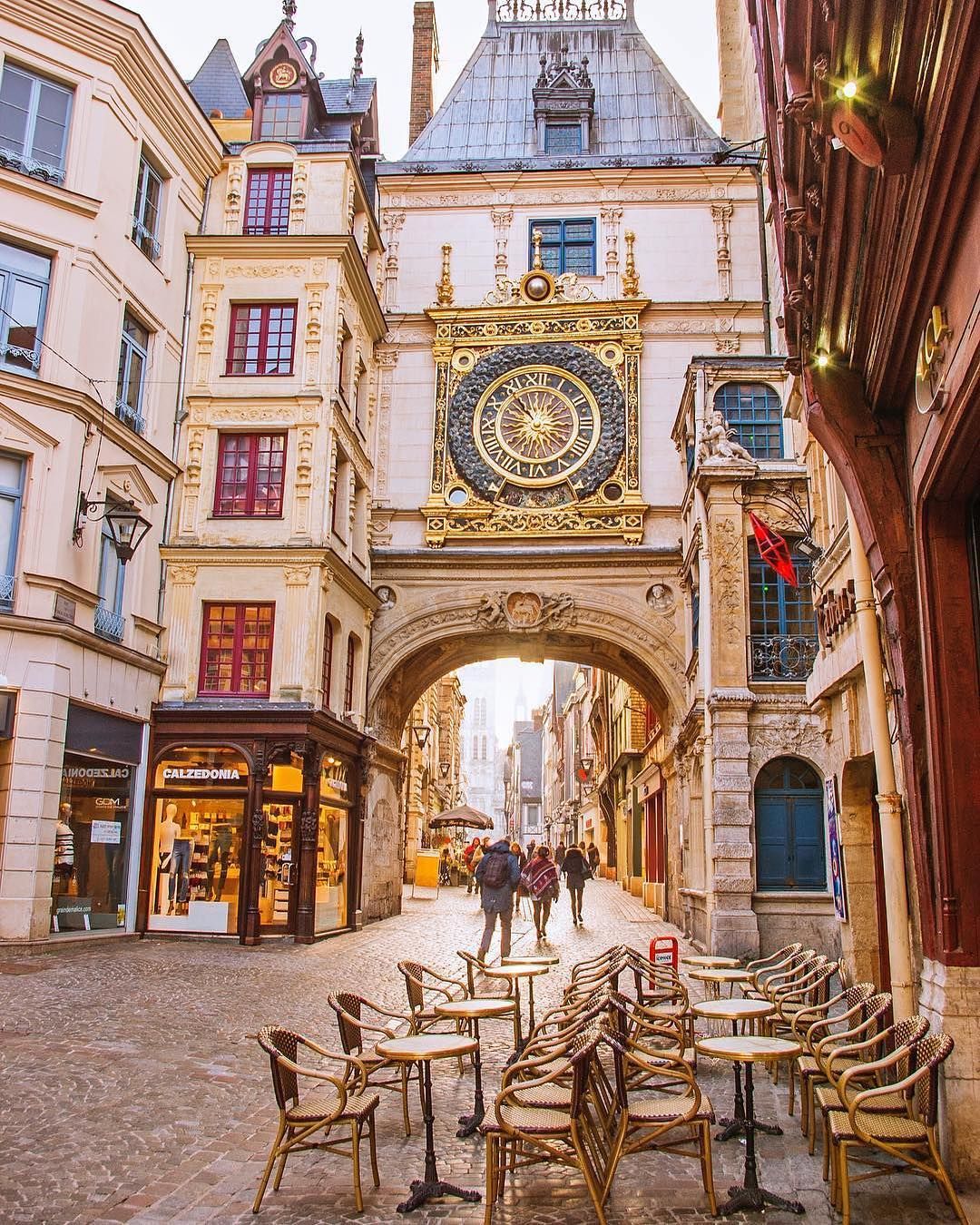 However, it was a bit disappointing in person. Yes, the clock tower was still as lovely as the photos I'd seen, and the little bistro tables in front of it were something out of a French-themed dream, but the absurd amount of people in the way was just annoying. I know, I know... I can't expect to have tourist attractions all to myself all the time (but I still do, sue me). As with every other spot, the trick to get the place as empty as possible is to get there early in the morning, but unless you have a rental car or are spending the night in Rouen, there are no busses that go there in the middle of the night.

Anyway, I was there and it was crowded and I got over it really fast, I did snap a couple pictures but nothing crazy. But It's okay - I got happy later in the day when I discovered the real gem of Rouen!

Please don't mind the family that wouldn't move out of frame.

I didn't know this, but apparently you can also go inside the clock and see all the parts, which is really interesting - although I had limited time there and didn't do the tour.

After being disappointed by the crowded clock, I went to get some food. I was way too hungry to take pictures, but I can tell you that the prices here were a lot cheaper than Paris. I ended up getting a little plate of 12 escargots de Bourgogne, which would cost about €18 in Paris, for only €9!

I wondered about what I assume is Rouen's main street, and it is filled with shops, restaurants, and cafes. If you're traveling with friends or family, and/or have a money (or room in your suitcase) to do some shopping, this can easily turn into a whole day adventure. Since I was pressed for time (bus schedules are fairly limited) and I have negative available room in my suitcase, I didn't do any shopping. Although, I was very tempted when I saw the little street market area in front of the Cathedral - go there if you're looking for adooraaaaable dresses and skirts.

This is it. This is the "real gem of Rouen" I mentioned earlier. It was already beautiful from the outside. As most European cathedrals are - extremely detailed and ornate.

I had actually snapped a few pictures when I first got to off the bus, as I was walking to the Horloge, and wasn't sure if I was going to have enough time to go in yet. I ended up having some time at the end, so I went back and went inside. I don't know if it was the time of day or what, but the lighting inside was incredible! It was also not overly crowded, and I was able to get some shots without any people in the way.

Aside from the extremely detailed interior, there are also statues and paintings around every corner. Again, the lighting coming through the stained glass windows really made them look divine.

As you get to the very back of this Cathedral, you'll come across something amazing. I mean... who designed this? WHAT?!

Unfortunately, that little door is closed, so you can't climb the stairs. If I were really good at Photoshop, I'd edit myself up at the top though - what a killer instagram shot that would be! Guess I could always just climb the side and hop in. But I'd feel guilty and have to confess after, and as I said - I was pressed for time.

The area outside the Cathedral is a great spot to relax and get some food or coffee (or a glass of wine). It's a big open plaza, surrounded by lots of little shops and some restaurants. When I was there, there was even live music going happening - although that is not uncommon in France.

If you have more than a few days in Paris, or have visited before and are running out of angles to photograph the Eiffel Tower, make sure to take a day trip over to Rouen for some fresh photo spots.

Note: Another popular spot in Rouen is the Musée des Beaux-Arts, which is free to enter. Unfortunately, it is closed on Tuesdays - and of course, that's the day I decided to go. *facepalm*